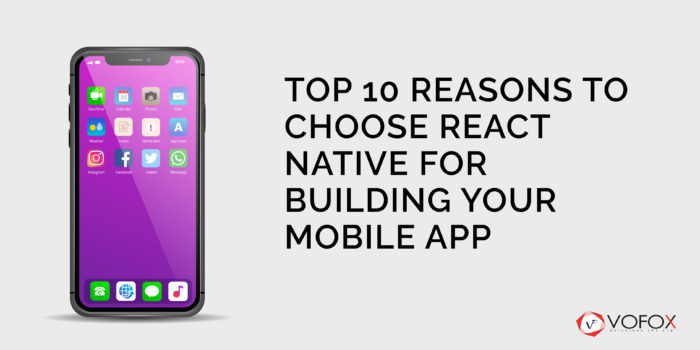 One of the major aspects that attract a lot of developers to React Native is its relatively lower development time. React Native delivers us with various pre-built components that can lower the development time and time-to-market of your product. However, this framework won’t provide you with all components that are available today, hence you need to build some of them from scratch.

Another cool benefit of this framework is that it is based on JavaScript and has a growing community of developers. Hence, React Native delivers developers with an extensive collection of packages that enable you to find pre-built components for nearly any solution that you need.

React Native uses an asynchronous bridge that executes JS logic on a separate thread without blocking the UI rendering and uses native APIs to render its UI. Hence, the performance that you get from apps built on this framework can be compared with native Android or iOS applications.

Another cool benefit that you get out of React Native is its code reusability. This enables us to reuse isolated components that won’t make any change to other components. As React Native components are isolated, managing updates can be relatively easy for us.

Being a product of Facebook, React Native is one of the mobile app development frameworks that have massive community support. As Facebook made React Native open-source, this framework can be easily accessed by any developers and can contribute to frameworks improvement.

React Native eliminates the need for you to hire two separate developers to develop applications for both Android and iOS. Moreover, hiring two separate teams for iOS and Android can increase confusion and negatively affect communication between development teams. This is because they often have different development speeds and will be harder to get in sync with each other. As a result, two projects can easily become unstable that will ultimately lead to inconsistencies in your app’s behavior, features, and UI. Since React Native uses JavaScript as its codebase, you can use your front end developers to build mobile apps using React Native. This is because developers who have experience in JavaScript can easily learn this framework and apply their existing skills in web development to mobile app development. However, if your in-house team lacks developers who have experience with JavaScript frameworks, you can extend your team by hiring react native developers to your team. Whereas, If you want to speed up your mobile app development by on-boarding quality talents with lower hourly rates, it is better to hire React Native developers from an offshore software development company in India.

Debugging native apps is a mundane process for most developers. However, debugging apps that are built on React Native is pretty easier as it supports hot reloading. This feature allows you to view the changes you made to your code in real-time as soon as you made the changes while the app is still running. This feature saves a ton of time and makes you more productive.

When compared with other frameworks, React Native focuses exclusively on UI. It makes React Native feel more like a JS library rather than a framework. Mobile apps that are built with React Native show more near-native performance, load faster, responsiveness, and are a lot smoother when compared to a hybrid app.

Facebook has made this framework open-source and this gives you the convenience of using its libraries for free. As this framework works under the MIT license, you can eliminate the need to make the source code public to reuse the software and gives the extra freedom for you to modify the software you’ve built under any license.

React Native uses a Modular architecture. In this type of architecture, a system’s functionality is separated into modules. These modules are often interchangeable and independent. The major benefit that you get by using this architecture is the ability that you get to upgrade and update applications more rapidly. You can also reuse these modules on both mobile and web APIs.