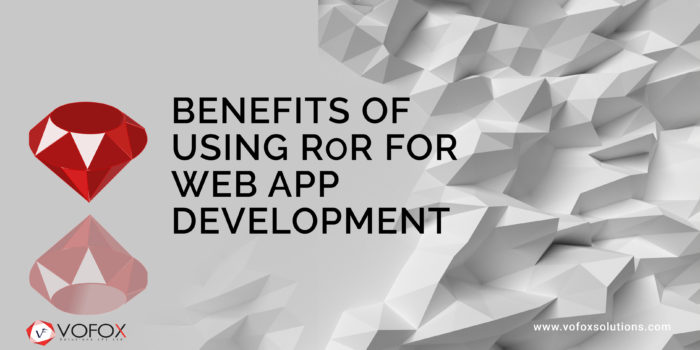 Benefits of Using Ruby on Rails for Web App Development

Choosing a framework that allows seamless web app development is challenging for most business owners. Ruby on Rails is one such framework that helps you build powerful web apps. However, just like all other frameworks, RoR has its own pros and cons. In this blog post, we will dive into some of the pros that make RoR different from others.

What is Ruby on Rails?

Ruby on Rails (RoR) or simply “Rails” is a server side web application framework that is written in Ruby. Ruby and rails are not the same things, Ruby is a programming language, and RoR a framework written on it. As an end to end web framework, RoR ships with many features such as an ORM (Object Relational Mapping) system for business data and logic, routing, and application management. There are different components of this framework that makes this framework advantageous to the developer. Let’s take a look at them below:

The main advantage of using this framework is code reusability. RoR accomplishes this with the help of an MVC(Model View Controller) architecture. This architecture helps developers to reuse code and also work on parallel development. You must be now curious about how MVC works. We’ll explain it below:

Essentially, software gets divided into three parts such as Model, View, and Controller. These three components are decoupled that allow developers to work on separate parts of your application at the same time. It means building an application is superefficient for development teams and it also means your developers can reuse code in other applications.

The controller would take that over to view and are displayed to the user. As these three components are decoupled, you can also have different parts of the team working on multiple sections at the same time. Both of this reusable code and parallel development are huge time savers.

Simply, these are pre-built features that come out of the box so that developers won’t need to configure everything from scratch. Although RoR delivers developers a vast array of pre-built functionalities, they can also tweak under the hood if they want to. As you can imagine, the main benefit that you get out of conventions over convention is flexibility.

The central pillar of the Rails philosophy is the DRY (Don’t Repeat Yourself) principle that ensures a clear separation of concerns and maintainability of your application. It also means keeping your code as simple and repetitive as possible. We will illustrate this with the help of an example. Let’s say you have a home page of a web app. On that home page there are three menus viz; home, services, and contact. You also have a header on all of those pages. Normally, for you to change the header on each of those pages, you need to manually go and change the header on the home, services, and contact. This is highly repetitive and time consuming.

With Ruby on Rails, you can centralize that piece of code to change it on all of those pages. Hence, you only have to change it once. This is great for devs because it means they can do the changes easily, and also upkeep maintenance is much more manageable.

As we discussed above RoR is geared towards complete ease of use. RoR is built on a very simplistic language Ruby. Hence, learning this framework won’t be a hassle.

With Convention over Configuration, developers won’t have to look under the hood. They have all these prebuilt items that they can pull from. However, they can build from scratch if they want to.

The Rails community is known for being super open and supportive. If you go on any Rails forum, you will see some great interaction. Due to the thriving community, there are tons and tons of gems (the Ruby community calls libraries “gems”) to pull from. They are pretty configured apps you can integrate into your application just like you use a plugin on WordPress. Because of its huge community support, lots of developers step into Ruby on Rails development. Hence it’s pretty easy to hire Ruby on Rails developers if you are planning to build a software development team for your web app development project. However, if you want to ship your web app faster it is highly recommended to consult an offshore software development company in India.

Ruby on Rails was created with faster development speeds in mind. Its well-developed system of modules, generator scripts, and an efficient package management system allow scaffolding a complex application in just a few commands. One can achieve rapid application development thanks to the expressive and concise nature of Ruby language, and also to dozens of open-source libraries for just about any purpose, which the Ruby community calls ‘gems’.